Joyce Cornick (Glenrose Friends) has not received any gifts yet

You need to be a member of Square Circle Forum to add comments!

I read your comment to Sharon's diagonals. Diagonals are my favorite and my very beginner way to contribute to the pile of squares. I follow Chirstine's Johnson pattern. The instructions are easy to follow and they work beautifully. Good luck!!

See the instructions below:

A number of members (including me) have found  that when knitting diagonal squares there is a tendency for them to appear 'kite-shaped'. It doesn't really matter as when they are joined they stretch and fit but it is a bit disappointing for the knitter. I thought that it was caused by the decreases resulting in a looser row end than the  increases so I tried using the 's1, k1, psso' method and found it did result in a squarer square. Here's what I wrote out for Sharon for whom it also works:

S1, inc by kfb in the next stitch, knit to end of row.

Repeat until the side measures 8"

(2 corners have been made, with only 1 slipped stitch to make them more pointed) so then continue -

Repeat this row until 5 stitches remain

Cut yarn and pull the stitch so that the tail is through the stitch.

[It isn't imperative to slip the first stich of every row - it works if you don't but that's just how I do it.] 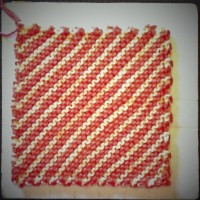 I'm very touched, Joyce. Your dear Mum continues on giving. Many Thanks.

My thoughts and prayers for you and your family.

Julia Jane Edge said…
Hello Joyce, and thanks for the welcome. I am making toys and sweater/hat/wrist warmer sets for KAS as I make squares for another charity. I hadn't really realised what a huge operation KAS is until I started reading more. What items do you make?

I am looking forward to see your work when ready. Thanks for all you do and done already

Joyce, delighted that you have joined the forum!! I am sure that you will enjoy it! I already know that you have become a yarn addict and  have enjoyed making numerous squares and have found lots of bargain mittens and gloves for the children in SA. Thank you for encouraging pupils, parents, family and friends to knit and crochet for KAS.You will now be able to add the photos for Glenrose friends and feel a greater sense of belonging to the KAS family. See you soon.

A warm welcome to Knit A Square.....from over here in Western Australia.

Making the basic square is a wonderful way to relax and help the children.  Plain Janes, as they are affectionately called, are the backbone of Knit-A-Square.  Since a blanket is created with 35 squares sent by people from around the world, squares are needed all the time. The basic square being a garter stitch/single colour or striped square or I think it is single or double crochet  if your preference is for crochet. By clicking on the KASpattern book tab at the top of the page you can also find lots of other patterns provided by our fellow KASers.

Please check out the 'Helpful Hints' tab at the top of the page as this may answer many initial questions you may have and will help you get started. Any other questions...just ask...we love to help.  :))

Here is a link to postage information, including our packing slip that we attach INSIDE our parcel to assist in the unpacking/recording process at Knit-A-Square in S. Africa.

If you'd like to see what other KASers have been making please click on the photo tab at the top of the page....and feel free to add photos of your own work...we would love to see them. Just click on 'add photos' and follow the prompts. Anything you care to make and send will be so appreciated by Ronda and the team and the children of South Africa.

If you want to see the most active discussions at present, you may like to click on the 'main page' tab and they are listed in the centre of that page...just pick one and click on it. It is a large website, but with so much fun and info.

Each month we have a fun theme to inspire and motivate us. If you would like to see this month's theme, please click on this link:

It is just for fun and there is no pressure to join in.  ANY squares you may like to make will be much appreciated.  :))

Here is a wonderful song created by one of our member's and her family. You might like to take the time to listen...you'll love it.

Thank you so much for joining us.  :) 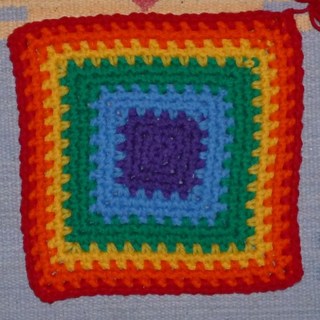