Wikipedia says, "Fire is a serious hazard in shack (informal) settlements in South Africa and it has been argued that "on average, over the past 5 years, there are ten shack fires per day with someone dying in a shack fire somewhere in South Africa every other day."  Key reasons for shack fires are listed as "lack of land, lack of housing, denial of access to electricity, to adequate water and to adequate emergency services", a sad indictment of "municipal policy-choices that have accomplished little towards changing the circumstances under which the urban poor live, causing them to bear the awful brunt of continuing cycles of death and destruction".

Knit-a-Square found itself more closely associated with this issue in the past week ... in the first instance, our recent delivery of 5 large boxes of KAS items to our good friend Maureen in KwaZulu Natal coincided remarkably with the fire at Jika Joe's settlement near Pietermaritzburg and enabled Mama Ntombi Community Projects mentor, Sandra Pillay, to distribute blankets and other items to those who had lost their homes, in a matter of days!   Sandra reports, “The fire devastated lives after destroying some 100 shacks, leaving more than 350 people destitute - they lost their homes and all their belongings.  Gogo Ntuli told us that her son, Zama's house was also burnt down.  She screamed at him to get his ID book as it is difficult to replace this, and he ran out with the ID and just the pants he was wearing at 4am that fateful morning.  Pastor Chris, the Vice Chairman of Mama Ntombi's Community Projects joined me (Sandra) at the scene this morning and distributed food, blankets, shoes and clothes to some of the people affected.  More help is needed to relieve the plight of these poor, devastated communities and we are especially concerned about mothers with babies and small children." 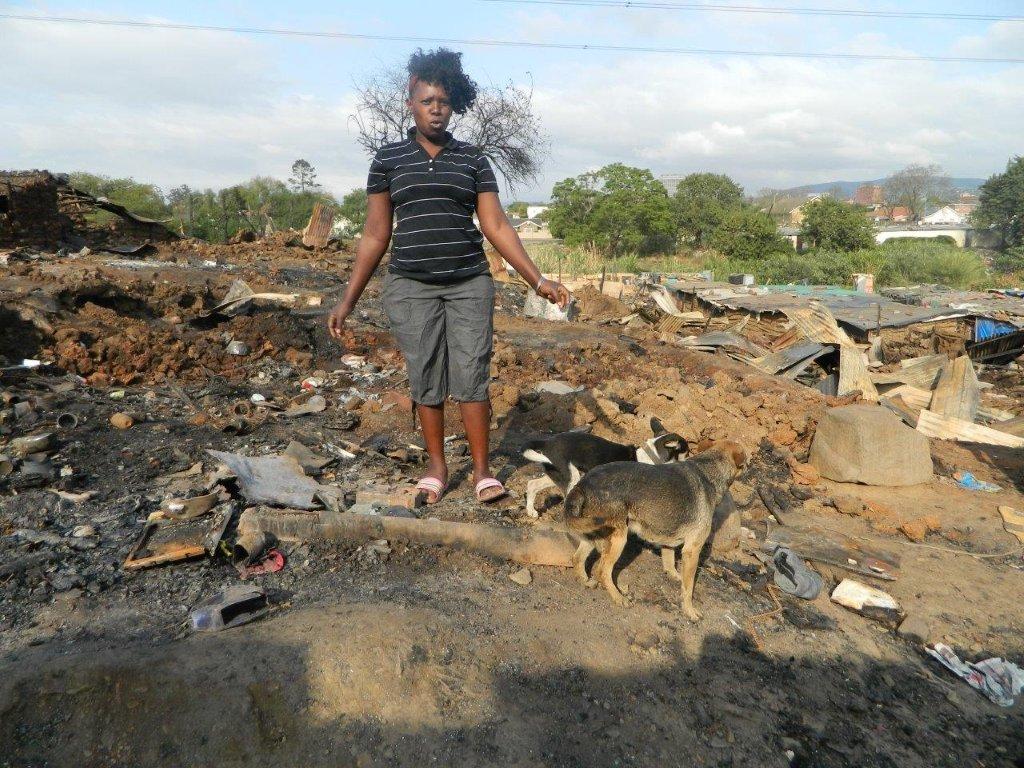 Then, last week we heard radio reports of another huge shack fire closer to home in the Kya Sands Informal Settlement area in the northern suburbs of Johannesburg, close to the KAS office.  Having made a note of the telephone number of Pastor Evans, who is responsible for directing the relief services in the area, we made contact with him and pledged our prayers and assistance.  After a very hasty appeal to our wonderful Thursday volunteers who responded with profound generosity, we filled the KASvan to capacity with KAS items such as blankets, beanies, tops and second-hand clothing, AND, in accordance with the most urgent requirements, many dozens of tinned foods, sugar, bread, jam, powdered milk, nappies, cereals and rice.

Having been warned that, in accordance with the picture painted by Wikipedia, there had been violent service delivery protests in the area after the fire, which had affected upwards of 150 children, let alone adults, we thought it wise not to travel en masse to Kya Sands and so Lindi, Wandi, Oti and myself delivered the goods to the large tented church where we were happy to see many piles of items which had already been delivered in answer to the radio appeal.  It's humbling to see how many people ARE willing to help, and there we saw beds and bedding, items of furniture and piles of food and clothing already waiting for distribution.

I must just say here that it is so great to feel safe going into any area driving the KASvan with its colourful decals showing that we are not part of the problem but rather hopeful of being part of the solution! 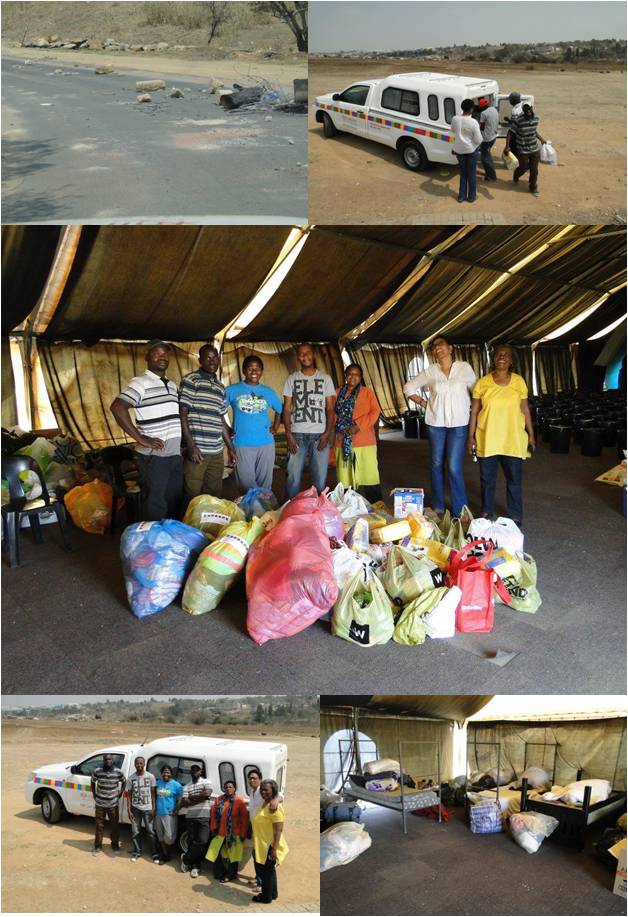 It was not possible for us to visit the "ground zero" of the fire, but we could see in the distance that the affected people were already bravely re-building their shacks - this time with wooden frames and with space between the individual homes which would hopefully serve to prevent the typically rapid spread of fire between adjoining structures.

I spoke to Pastor Evans earlier today and he was so thankful to everyone who contributed to Knit-a-Square's ability to assist ... he said that many of the people had settled into their new homes already, but reported that his most recent concern had been two very elderly men who had been rendered extremely vulnerable and remained beyond adequate assistance.  In fact, there had been three of them until one sadly succumbed, on Sunday, to the shock, fear and trauma of losing his meagre home and belongings.  We pray that he may rest in peace and that his friends will find help to rebuild their shacks and their lives.

We will stay in touch with Pastor Evans and hope to be led to crèches and daycare centres in the Kya Sands settlement for distributions before next winter.

This has been a sad report but we take heart from the fact that our amazing contributors all over the world empower us to show, first-hand, that people are concerned by the difficulties and suffering faced by vulnerable people; that many, like you, do truly care,

What a privilege it is to be at the "coal-face" and to distribute freely the products of YOUR amazing generosity and love for others.

We hope you will visit the Children of Fire www.charitysa.co.za/children-of-fire.html website and find encouragement in the beautiful story of Dorah and in reading of the incredible work done by this fantastic group of people which, like KAS, is supported and funded by the generosity of people who care !!!

Isn't it a relief that KAS is on hand to provide some comfort and a sense for the victims that someone does care!  Deeply touching report Ronda & Wendy - thank you.

Thank you for this comprehensive report, Ronda. It saddens me to read of these ongoing tragedies occurring, but so pleased to read that KAS is providing support to them during these difficult times. So inspiring also, was Children of Fire International and all it has and continues to achieve.

A sad but inspiring report this week!  I am so glad KAS is able to come alongside these victims of the fires.  The work of Children of Fire makes us realize the incredible need of so many, as well as the incredible kindness of so many good people in this world.

A very sad story; a real eye opener.  We live every day doing our normal day to day things and never really know what's going on in the rest of the world except what's reported on TV and news stories like this.  This is so sad, but I'm glad to see how KAS helps in many ways and touches so many lives to make them a little better.  Thanks to you!!

really touching report, wish there was more i could do to help but will just have to keep knitting and do my little bit. Thank goodness for KAS and other organisations that are able to help at the "coal face" as you very aptly described it. Love to all x

So saddened to hear of yet another challenge heaped on top of these people, who have so little to begin with.  But I'm so glad that KAS was able to assist in some way and it certainly gives us even more incentive to keep working toward more squares, more blankets and more $ to help with food and other necessities!

As Pam said, a very touching report and thank you for sharing with us!

The blankets and beanies will be so appreciated. It is hard to imagine living where the threat of fire is there every day. The Children of fire charity is amazing in their  accomplishments and have a beautiful vision for the future. Lets send prayer and loving thoughts their way.

Thank you, Ronda, for introducing us to another grassroots organisation that is doing great work in South Africa.  I can see how important it is that you have a colourful KASvan.

I am truly humbled by the fabulous support KAS is giving to those it such dire need.. We in our comfortable homes and country's have really no idea what it is like to have so little and to even lose that.. My prayers and my heartfelt praise to you all for the wonderful work you are all doing... and thank you for including us all in this marvellous work so we too can each night give thanks for being able to contribute to help in some small way.. Thank you KAS from the bottom of my heart.

Thank you so much for this heart aching but very informative and inspiring article.  Inspiring in that it reinvests me in making squares, hats and vests for the children and sending toys too as the need is truly huge.  There is so much need and it's sickening that the poor are always the least protected.  I am so glad to see everyone pitching in to help and so grateful the KAS van is a source of information and protection when they go into more dodgy areas.